it took me three days to get through all the practical magic blog party participants list. it was so much fun and i really loved it. i wasn't that happy with my post, but all those lovely comments that were left for me made me feel much better about it.

yesterday was a beautiful fall day but i never got any pictures. rain moved in early this morning and has been a steady visitor along with a very cool 65 degrees. it is fabulous! but the rain does prevent me from working in the garden, which had been on today's agenda, so i hied myself off to the local farmer's market in town as i hadn't been in it feels like ages!
i picked up some yummy yellow squash, a nice bunch of basil, a pretty hunk of ginger (which i plan to tincture) and some lovely apples -all of which i didn't photograph...

i also picked up these 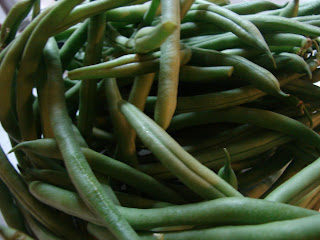 and this lovely was waiting just for me... 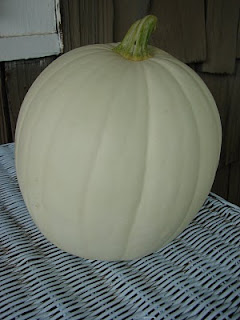 my first pumpkin - i'll be heading out in the next day or so to the big farmers market on the outskirts of town hunting more pumpkins... i've loved watching Vanessa's pumpkin growing odyssey over this summer and have decided to collect as many pumpkins as i can and save the seeds in hopes of having my own magic pumpkin garden next year...

in other news, my leave from work has been extended indefinitely. my doctor wrote me out "until further notice" so there is no return date looming over me. honestly, part of me is very worried about this - but only because of the financial aspect of it. the other part, the part that doesn't miss the stress, the games and the bs is well...thrilled. i have no idea how this will all work out but i'm determined to not stress out over it. i'm determined to have faith that i am exactly where i'm supposed to be and that all i need will be provided for me. i am remembering this word and what it means.

i'm going to head off for now, i have many things i've been working on this week and need to get back to them...
blessings
~*~
Posted by Laura at 1:56 PM 12 comments:

"he will hear my call from a mile away, he will whistle my favorite song, he can ride a pony backwards..." 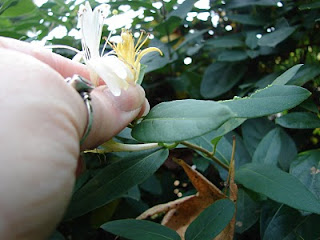 "he can flip pancakes in the air and he will be marvelously kind..." 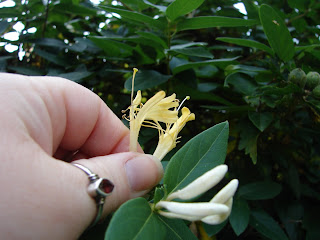 his favorite shape will be a star..." 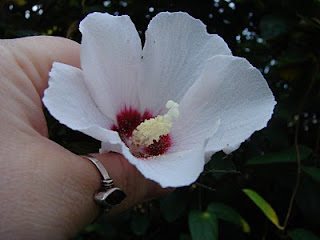 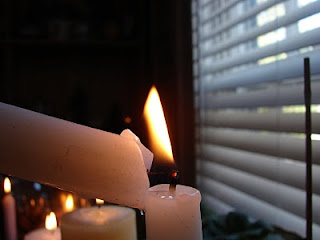 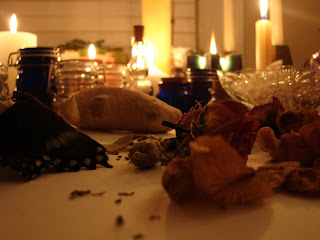 "Sometimes I feel there is a hole inside of me, an emptiness that at times seems to burn. I think if you lifted my heart to your ear you could probably hear the ocean." 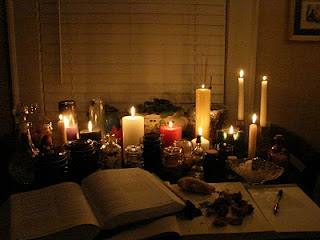 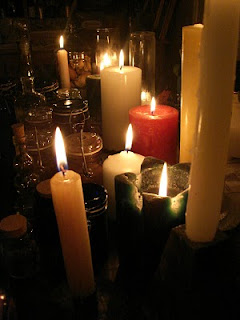 "I have this dream of being whole, of not going to sleep each night wanting. But...still, sometimes when the wind is warm or the crickets sing, I dream of a love that even time will lie down and be still for. I just want someone to love me. I want to be seen..." 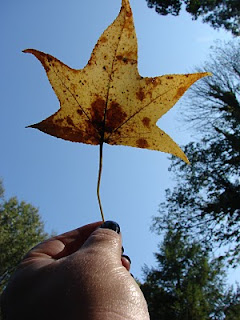 {many thanks to Anna and Justina for hosting this fabulous party!}
Posted by Laura at 9:07 PM 37 comments:

that is what i thought my life would be... in oh so many ways...

most recently, i thought the leave of absence from work would make for a very different approach to life. i had imagined that if i wasn't spending all my energy trying to make it through the work day, i'd be able to use that energy for creative endeavors...

apparently, i was wrong...

i wish i could say that i had started writing again or drawing or maybe even re-organizing the studio so that i could get in there and create something...anything. But i haven't.

The only creative thing i've done in the past two weeks was knit on a scarf, make a few meals and bake up some pumpkin bread. i did work in the garden a little last week and get the yard mowed. and there have been lots of books (all ones i've read before) and a few movies. but that is truly the extent of how i have spent my time. i spend a lot of time online, reading blogs and being amazed at all that you wonderful souls do... and there is a lot of time wasted on facebook playing vampire wars or farming...i really need to delete that account.

i feel like i'm in a funk again, one that i don't know how to get out of. three weeks from today i'm having surgery again, to put a stint in my head. the pains are not receding at all, and at times feel worse than ever.

i can't go out and go thrifting (which i've been inspired to do by many of you), i can't purchase any new books so that i can have something new to entertain my mind and i can't go find buy any of the new halloween decor that i see in commercials or online. i saw a cake stand at target that i would love to have, but cannot spend on it as i don't have the funds.

the past two nights - within an hour of having dinner - my blood sugars have plummeted and i don't know why. last night was down to 60 but the night before was a 49...it scared me. i was so pale and shaking so badly. i have to figure out what is going on, because if my blood sugar isn't under control they won't do the surgery.

i've just re-read this post and am really not even sure why i'm posting it...but this is my life and what i have to share...

hopefully something better will be on the horizon. (at least there is the Practical Magic Blog Party to look forward to...)
Posted by Laura at 4:39 PM 13 comments: 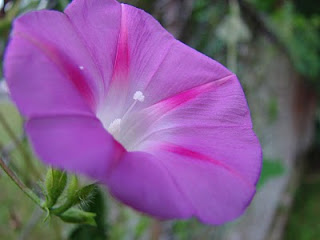 Change has definitely come to my house. The angiogram went well. The only problem I had was that they failed to mention prior to discharge that I couldn't be alone for 24 hours and I ended up having to stay at my mum's. Alone...as she had a bridge game scheduled and couldn't cancel it. Ugh! The procedure did confirm a narrowing of one of the veins. It also showed I have a condition called fibromuscular dysplasia in both of my carotid arteries. They said it shouldn't cause me any additional issues and was something they see a lot in women. I saw my regular neurologist a week after the procedure and he took me out of work. Today is my first official day of medical leave. He's signed me out until October 10th and we will see how I'm doing during this time. I see him again at the end of September and he is likely to extend my leave if there has been no improvement.

It is a very strange feeling to know that I do not have to go to work and that I don't have to feel guilty about not being there. Part of me had hoped that the freedom from the stress of my job would prove to be a miracle and set me free from the migraines. That didn't happen. I'm still having them, as frequently and painfully as ever. It is just nice to know that I don't have to endure the added pain of putting on the brave face. If I feel horrible, I can lie back down until I feel better. I can sit on the back deck in the early morning coolness and think my thoughts and dream my dreams. I can ... dare I say it... relax.

Yes, there is the stress of no income coming in currently. I'm not yet certain how I will manage the bills next month. But this month's bills are paid, there is a full tank of gas in the car and plenty of food in the cupboards and fridge. I'm not going to let myself worry...I am divinely guided and protected at all times. :)

I meet with the radio-neurologist tomorrow to go over the next procedure (the pressure test/possible stint insertion) and to set the date. I'm hoping they will fit me in soon as I'd like to get it over with as soon as possible. I'm even hoping to ask if they can schedule it while my mum is on an out of town trip so I won't have to fight with her about where I'm staying after it is over. :)

This past Saturday I took myself off to the farmers market and picked up some more peaches, green beans, squash and zucchini. I didn't get many green beans, but I went ahead and blanched and froze them for later in the year. I'm going to work on the peaches today and tomorrow. There is only about two weeks left to get them local before the season is over and I'd like to sock some more away before the season is over, as well as more green beans.

Apple season is starting to kick in and I have plans to make an apple pie in the next day or so. Perhaps some apple bread as well. I haven't ever tried to freeze apples, but I may try it this year. I know I'm going to make homemade applesauce as it is much better for me than the store bought.

On Saturday after a bit of shopping and errand running, I decided to work on a project that I'd been wanting to tackle for a while. I took this... 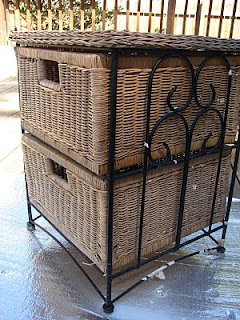 and turned it into this... 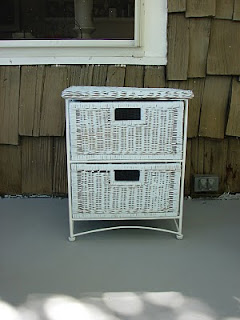 I'm not sure if I'm going to leave it like this or just paint it completely white. After I took this photo, I saw a little spot I'd missed and will need to touch up. This is my first attempt at turning something into something else. I have another piece I want to paint. It is a simple light wood plant stand. I'm torn between painting it white or the light blue that I used in the little table above. (It was exterior paint that I had left over from the porch ceiling. I'm actually thinking of repainting the front door this color as the blue that I picked and had painted on the door is much darker than what I originally wanted. Still thinking about that though...

Well, enough of my ramblings for now. I'm off to start a new book and maybe start on those peaches. The nice thing is, that if I don't feel like working the peaches today, there is always tomorrow...